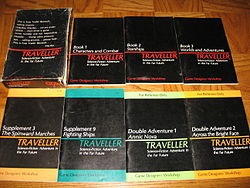 During the development of Traveller as a game, there were three slow, somewhat unintended, but certain nonetheless currents of development from the three little books of Classic Traveller to the massive electronic (and soon physical) tome which is Traveller 5. I call this kind of development "creep" as it was, as far as I can tell, unintended, and usually quite slow, but it did change the game considerably.

The first creep, and the only one with relatively undebatable detrimental side effects on the game, was the Modifier Creep. You see, Classic Traveller (like most editions of Traveller) uses a 2d6 curve for task and combat resolution; this kind of curve is far more sensitive to modifiers than, for example, the 1d20 curve used by the D20 family of games. A +1 modifier influences the 2d6 curve in quite a significant way, and higher modifiers have much more effect than the simple incremental effects they have on 1d20. A big enough modifier would "break" the curve - that is, force either an automatic success or an automatic failure, which is an undesired result in an RPG, where "swingy" mechanics are usually preferred.

So Classic Traveller, very reasonably, kept skills very low - to an average of 4 skill points per character and usually no more than 1 point in each skill. Skills of 2 or 3 were uncommon and skills beyond that were rare. Also, the combat modifiers were, for the most part, quite modest. But Book 4: Mercenary and the books that followed, as well as later Traveller products, started adding more and more skill points to characters and more powerful weapons with bigger to-hit modifiers. The end result was a "broken" 2d6 curve and less interesting mechanics.

A second type of creep, which is more a matter of taste, is complexity creep. Classic Traveller was a very simple game, where a character can be described in a few rows of text and a starship in a single paragraph; character generation and ship-building were very simple, sometimes too simple, and very quick (about five minutes per character). Book 4: Mercenary and Book 5: High Guard added many more details, including a much more cumbersome character generation system, as well as much more technical ship design rules. While the High Guard design rules were excellent, they started a trend in Traveller which led to more and more complex design rules up to the highly technical Mega Traveller and Fire, Fusion and Steel design systems (and Traveller 5), which were very detailed and very complex. That's not a bad thing in itself, mind you, but a major departure from Classic Traveller's simplicity nonetheless.

A third type of creep is scale creep - the gradual change from pocket empires or a loose Imperium as implied by the first three books to a much grander, more secure and much more powerful Imperium as implied by later products. I think this trend started with Book 5: High Guard. While I love High Guard, I think that it started a chain reaction which made Traveller extremely different from what was apparent from the original three little black books. HG did two main things: 1) it increased the size of military starships, as well as they costs, by one or two orders of magnitude; 2) it changed the focus from small civilian and paramilitary ships with light weapons to big naval engagements.

The result was, of course, a VERY expensive navy - not 4x 1,200 dton cruisers per subsector, but rather multiple 30k dton cruisers. This costs a lot of money, and a loose Imperium or pocket empires as implied by books 1-3 can't finance and maintain such an expensive fleet. So then came a huge, powerful Imperium of 11,000 worlds with strong Imperial rule and large interstellar military presence making piracy and smuggling much less feasible. A large, powerful, stable Imperium became, at one point, a bit boring, so they started a Rebellion, which, due to the huge ship sizes, was mostly fought above and beyond the players' level. Because it involved such huge fleets and empires, it eventually fell into stagnation and the slate had to be cleaned by the Virus. But the Virus was controversial and so fractured the fan base.

Now, MT and TNE aren't necessarily bad, but they do have a completely different tone than LBBs 1-3 and the first few adventures. The same goes with the two previously-discussed processes.
Omer Golan-Joel at 1:09 AM
Share